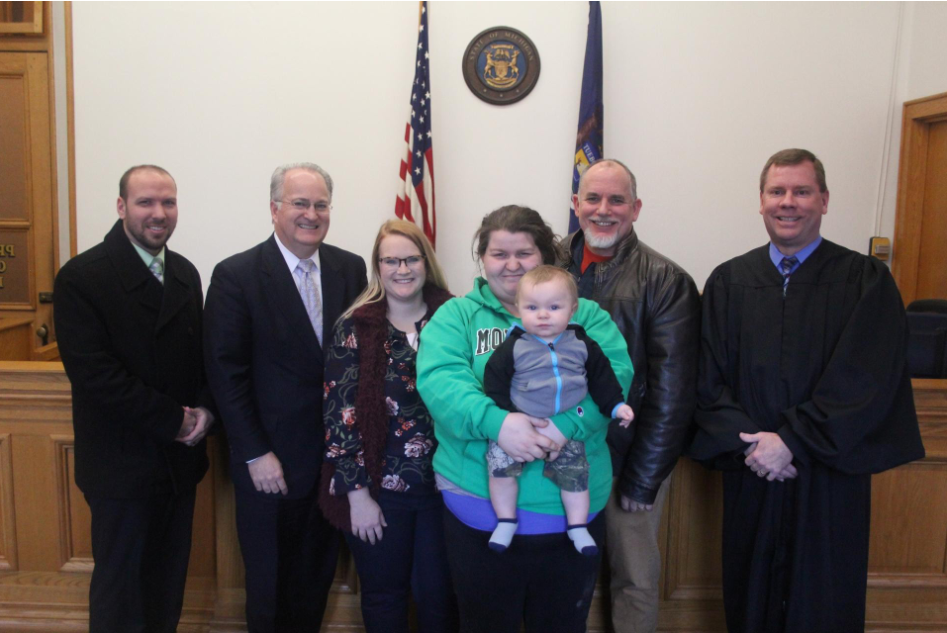 Denman, 21, of Belding, is just the second person from Ionia County to graduate from the program, and the first in about a year and a half.

“It taught me a lot, that’s for sure,” Denman said as she held her infant son, Carter, at her graduation at Ionia County Probate Court Thursday morning. “It made me grow up a lot as a mom, as a person.”

The specialty court is designed to help tackle underlying personal issues that frequently lead people into lives of crime, instead of just imposing jail time. The idea is to give offenders with potential a second chance, and the tools to make it work.

Denman entered into the program in October of 2017 after pleading no contest to a misdemeanor domestic violence charge. Those involved in the court program all raved about her progress as she graduated Thursday.

“She has been committed from the very beginning of the program,” Mid-Michigan Regional Mental Health Court Coordinator Elizabeth Worden said. “I would say that she’s the only participant I have ever worked with that has come to things she’s not even ordered to come to. Her engagement level is wonderful, and I think that probably helped her be successful.”

Attorney Michael Honeywell said Denman has been a model participant of the mental health court, while counselor Jon Youngs said she’s been a great participant in sessions.

But Ionia County Probate Court Judge Robert Sykes assured her the work is not done.

“A lot of times when people reach the end of a court case, they view it as the end,” he told Denman. “You’re graduating today, but the hard work is just beginning. You’re not going to, at least formally, have the safety net of mental health court.”

Sykes encouraged Denman to use what she’s learned and apply it to be a better person in all aspects of life.

Denman said the most helpful parts of the court program were the stability, confidence and discipline it provided her.

“It helped me learn how to schedule things,” Denman said. “I learned a lot more about my self-esteem. It was pretty low, now it’s higher. It taught me that you need to have discipline or you’re just going to fail.”

Worden said that treatment courts are a great tool, but reaching graduation is no easy feat. That means Denman’s accomplishment was pretty impressive.

“The treatment courts are special to help individuals that don’t meet the requirements of a regular probation,” she said. “It’s big that, finally, we have someone that’s successful and that’s committed to the treatment. It’s hard, it’s a very busy schedule for them. For them to be able to handle everything, it’s challenging.”

Potential participants are referred to the court if the county prosecutor’s office, the judge and the defense attorney believe a person may benefit. Then a mental health screening is done at the Right Door for Recovery and Wellness in Ionia, to determine if the candidate would be a good fit.

The program consists of several phases, with restrictions for participants lessening along the way.

Sykes said the program can be a great benefit, but participants must be serious about getting better.

“It’s a great opportunity to be admitted into the mental health court program,” he said. “We expect a lot from the participants. If they aren’t able to comply, we have others waiting in line.”